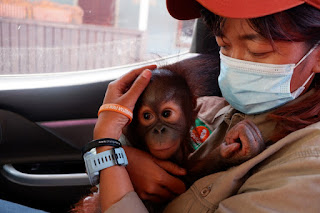 Travelling to rural areas, understanding the life of local people and orangutans, has transformed me from an ordinary person into an activist. I was born and raised in Jakarta and did my undergraduate in Bandung. The two cities brought me into an environment where people are busy with their own lives. Getting money, a respectful position in a reputable company, and getting married were the top three priorities of most people in the city. Let alone thinking about the society, environment, or even animals. I was as innocent and indifferent as the majority of people, until I decided to take a job that was out of my comfort zone after I graduated.

I started my professional journey as a facilitator in a rural area in 2016. It was a life-changing experience because it taught me how it feels to be a forest-dependent person. While money can solve most any problem in an urban area, the rural area is a different story. I still remember how much I struggled to live there even though I had money. There were no grocery stores, no electricity, no signal coverage, no water unless it was raining, and no gas stove, only a wood-burning stove. It impressed me how the local people were living effortlessly without much money. They grow, gather, and hunt for what they need to fulfil their livelihood. They’d get everything they needed to survive without spending a single penny. But I also saw their vulnerability by depending entirely on nature. When I was in Mentawai, I wouldn’t have enough water for my daily needs in the dry season because the only water source was rainwater. The only option was to use brown-colored water from the river in Borneo for drinking, washing, and cooking. It was such a surprise that it wasn’t a problem for me or for them, but it’s a whole different story when something is happening with their land, forest, or sea. In Borneo, people fought over their lands when a company came in. But sometimes, they did nothing and grumbled over how hard it is to grow productive crops or find prey in the forest after losing their lands. I wish I could do something, but the only thing I could do back then was listen to them.

I started working for orangutans in 2018 after my contract as a facilitator in Borneo ended. I met the Centre for Orangutan Protection and got along with them as we had the same working area in Borneo. I adored them for their passion and commitment to orangutans. Most of the people I met from COP were about my age, mid-20s, and some graduated from respected universities. They spent their youth taking care of orangutans in the middle of the jungle with limited access to electricity, network coverage, or to the ‘normal life’ that most people have at that age. But actually, it was not my intention to work for wildlife. I spent two years working for humans, and I questioned how people could prioritize animals over humans. When I was curious to learn about how Dayak people hunt for food, COP was campaigning against air rifles for hunting. I mean, if not hunting, how could they fulfil their livelihood? Should they shift their life to be like ‘modern people’ in the city where everything requires money? I don’t think that’s a better solution.

During my time with COP, I had many of my firsts. First time being a highly mobile person, first time directly encountering orangutans, first time getting lost in plantations, first time being a tour organizer and a guide to visitors, first time developing volunteer programs, first time being incorporated in wildlife and forestry-related meetings and conferences, and many more. Then I realized what I was doing wasn’t different from my previous job. I still took care of the local community by helping them develop ecotourism programs, seeing them challenge each other in preserving their culture and nature, hearing complaints, and being asked for help when there are land conflicts. But this time, I had the power to do something. The power to help local communities preserve their lands and forest while still maintaining their livelihood. The power to make an issue bigger, be heard by a wider scope of people, and create mass movements toward better regulation and action. And that is all because of the power of the orangutans.

I also saw the local people’s way of living from a broader perspective. Many of the hunters ended up hunting animals that were not supposed to be eaten. They unintentionally ‘invited’ a wildlife trade market that risks their own life and the life of the forest. I was once offered to buy a sun bear because an old woman caught it and wanted to trade it for money. She was innocent because she didn’t know that it was prohibited to catch and trade a sun bear. But what if I saw that as an opportunity to gain money? What if I were a wildlife broker and asked them to catch more cubs and other wildlife in the forest? And what if it were an orangutan and later it became a popular commodity?  Will the old woman be accused and jailed for doing that? That was how my inner turmoil arose.

In 2019, I spent a lot of my time on the road, travelling all around East Borneo, checking the existence of wild orangutans in their habitat. We— my team and I—drove up to 300 km a day, using a double cabin car or trail motorcycles, travelling around East Borneo. It was pretty much like a road trip. The roads we took mostly couldn’t be found on Google Maps and were too arduous to pass through. The scenery was either green or brown-black from plantations, dirt roads, and coal mining areas. I could hardly see any rainforest along the way, but we did spot orangutans effortlessly from the road. Some were female orangutans with their babies in their nests in a tree, while others were old male orangutans sleeping on a tree branch. And it was all happening in plantations and mining areas. We were overwhelmed by all reports and viral social media posts from the public capturing orangutans in such areas. And even more, devastated by the reality we got directly from the field.

The further away, the more I see, the more I question myself. Is it more important to consider the life of humans over wildlife? Or the other way around? Aren’t humans and wildlife the same in surviving life? Then why does it always seem like they’re conflicting with each other, and we have to choose one life over another? I kept questioning until I realized that it was no one’s fault in particular but a collection of misguided actions.  In fact, we—me, you, humans, animals, and any living beings—all face the same problem. We are losing our lands and forest. We are losing our habitat. And soon enough, we might be losing our earth and everything that we take for granted at the moment.

All the dots were connected, and I knew that this was the path that I should take. I knew that our work for orangutans is not only for orangutans but for the whole ecosystem. I am sure now that both humans and wildlife urgently need a safe place to live. And by saving orangutan habitats we could save humans altogether from destruction, poverty, and disasters. It is not about choosing one over another but how we as humans want to live in harmony with the other living beings without harming each other. I know that is not an easy task to accomplish, but it has to be done. It has only been three years since I walked in an orangutan’s steps, and I will keep walking on this path. For me, fighting for orangutans means fighting for humanity, fighting for the whole ecosystem, and fighting for our future.